Whether you’ve worked with an agency before or it’s your first time, understanding your contract can be confusing—especially when it comes to the billing process.

Fortunately, our billing is simple and straightforward. And in this article, we’ll show you how it works, help alleviate any confusion, and set expectations so you can manage your budget and payment a whole lot easier.

Getting started: What fees do I pay in the first month?

For all new accounts, we configure all settings and complete the account build based on the data you provide us. This is called a “campaign creation.”

Upon the effective date of the paid advertising management agreement, we’ll send the first invoice containing the campaign creation fee. This initial fee is billed one-time and only in your first month.

So, if the date of agreement is on July 8th, expect to receive invoice #1 on the same day.

How long does it take to launch my campaign?

It usually takes 10-12 business days for campaigns to go live. This includes the client’s completion of the onboarding process and providing proper access to accounts.

Now, it’s important to note that any delay in the onboarding could cause the campaign to be launched after the second invoice was scheduled to go out. And we’ll talk more about this in a second.

But before that, let’s jump to the next topic.

Once the campaign is created and all set up, it’s time to manage and optimize.

This means we’ll do all the account optimizations needed to improve the performance of your account, including:

And other relevant optimizations according to your optimization schedule based on your account’s ad budget.

This process is called “campaign management.”

One month after the effective date of agreement is signed, we’ll send out your second invoice–the monthly management fee plus the agreed percentage of the approved ad budget.

Learn more about why we charge an ad budget fee and why we bill according to the approved ad budget.

Moving on, the campaign management fee (also called “monthly management fee) is sent one month after the effective date you signed the agreement, but only if your campaigns were launched within the same month.

Going back to our example, if you signed the agreement on July 8th, then you’ll get the second invoice (monthly management fee) on August 8th.

But what if the onboarding was delayed and your campaigns were launched after August 8th?

Then you won’t receive any invoice until the day your campaigns are launched.

From then on, expect to receive the future recurring monthly management fees every 10th of the month.

To help you visualize the billing timeline, we’ve created this infographic. 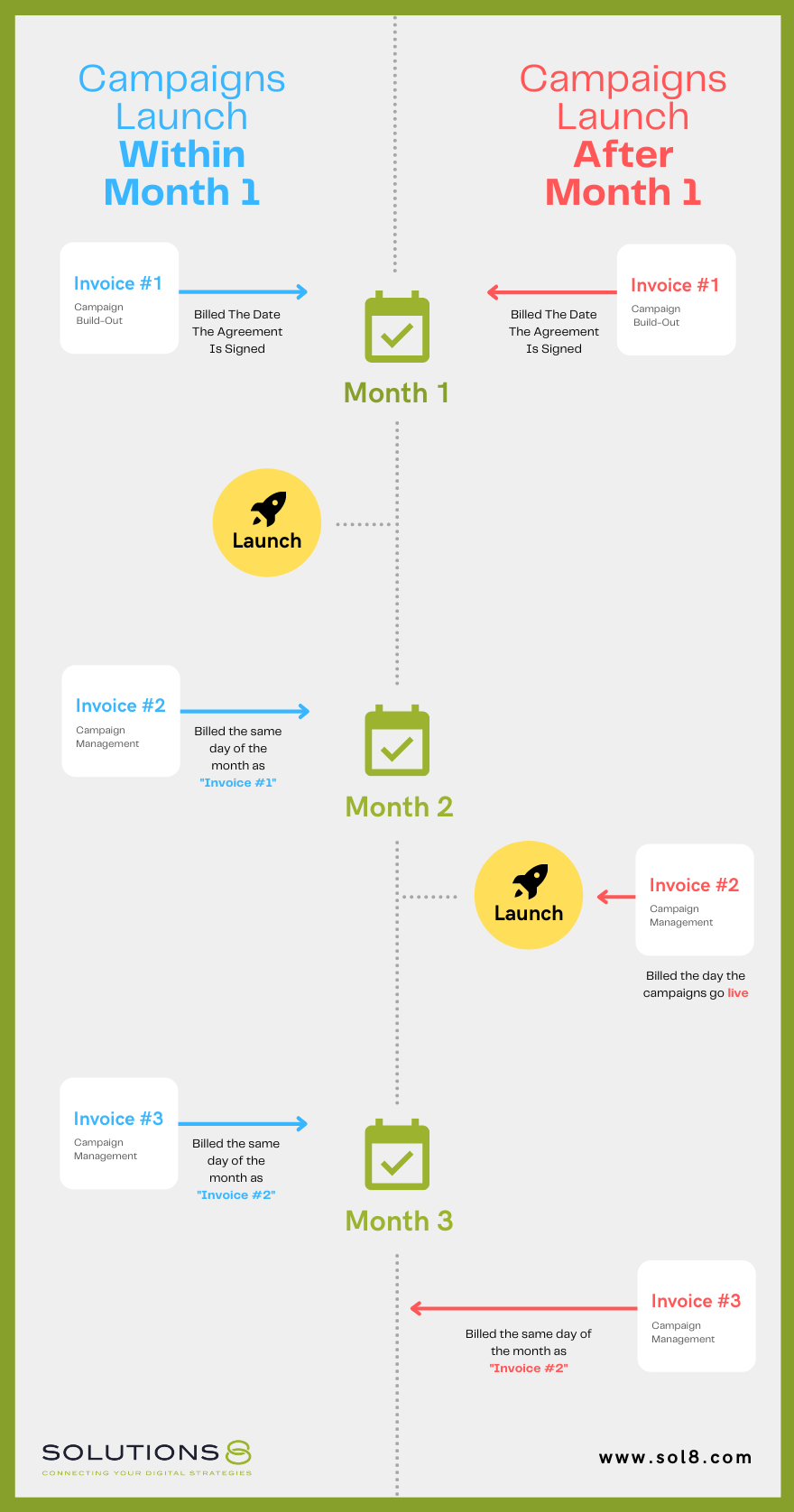 Want to know what it looks like with specific dates? No problem!

Here's an example of what the timeline looks like with exact dates.

Campaign is launched on-schedule (within month #1)

Campaign launch is delayed (after month #1)

And there you have it. If you want to know more about what happens in the back end within the first month, check out our post about how we organize and execute our client management process.

Why Do You Bill According to Approved Advertising Budget, Not Ad Spend?
Why is my profit margin becoming thinner as we scale?
What should my monthly budget be to start?
Why do you charge a 10% fee?